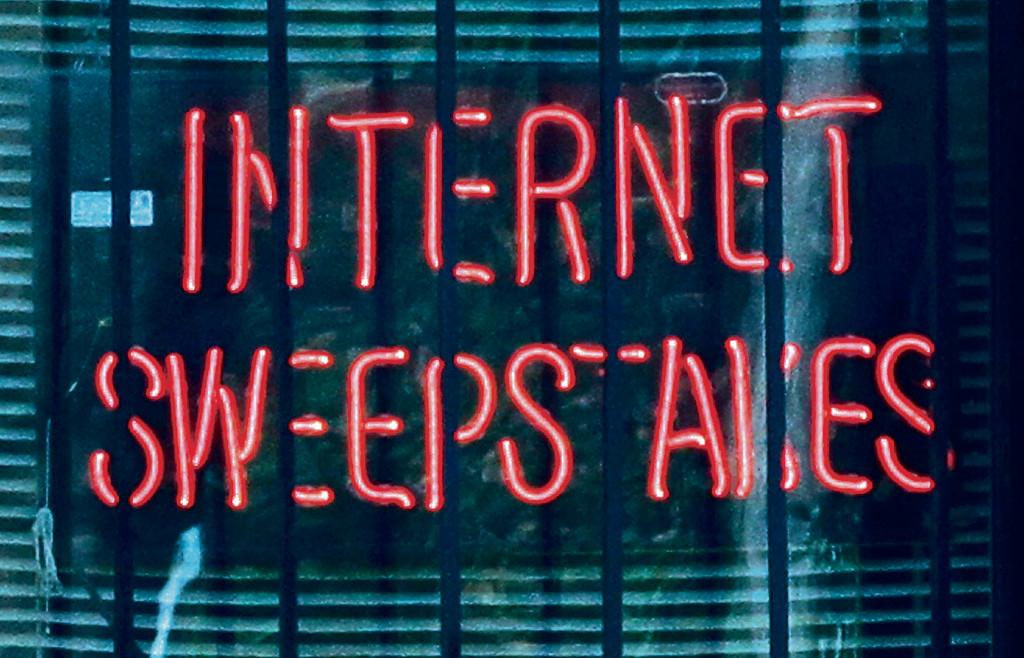 Gov. Roy Cooper is at loggerheads with state lawmakers over teacher pay and school funding.

Cooper wants to boost teacher pay by 8 percent and spend more than $100 million to make North Carolina schools safer. His budget proposal would fund higher spending by suspending a scheduled drop in the state’s corporate tax rate from 3 percent to 2 ½ percent.

Isn’t there a win-win solution here? Instead of carping over how the pie is carved, can’t we just make the pie bigger, giving the governor a win on schools and the General Assembly a win on tax cuts?

Those terminal-based electronic games that lawmakers try unsuccessfully to banish every few years are back. Actually, they’ve never really left. Police raids on sweepstakes centers lead to lawsuits, conflicting court decisions and subtle changes to the games that operators say makes them legal – or at least not definitively illegal.

North Carolina’s effort to ban video sweepstakes has been an exercise in futility and humiliation. Gaming parlors, sometimes euphemistically called “internet cafes,” are open for business across the state, raking in cash that could be a lucrative source of state revenue.

Legislators’ refusal to legalize, tax and regulate the sweepstakes industry is costing taxpayers twice. The state’s missing out on a cut of the action and millions have been wasted in ineffectual law enforcement crackdowns and long-running legal battles.

Opponents say video sweepstakes is gambling, plain and simple. Anti-gaming laws exist thanks to an alliance of big-government busybodies on the right and left – conservatives who consider gambling to be a sinful, immoral vice and liberals who say it’s a social ill that disproportionately affects poor people.

Neither argument is particularly compelling. Placing bets may not be good for individuals or for society, but it strikes us as a core personal freedom issue. Free adults may spend their money in any number of ways many of us don’t like, but it’s their money – not ours and not the state’s. If gambling is a crime, who’s the victim?

Since lawmakers narrowly approved the North Carolina Education Lottery in 2007, players have paid more than $3 billion toward public schools. Yet we haven’t reaped many real benefits because money is fungible and budget writers too often used lottery revenues to replace other funding sources, diverting dollars previously earmarked for education elsewhere.

Bringing sweepstakes out of the shadows and into the sunlight gives us the chance for a do-over. Taxes on electronic gaming could be used to boost teacher pay and provide much-needed safety upgrades to our schools, creating a net benefit for public education.

We agree with Cooper – teachers should have 8 percent raises and $35 million is a paltry sum for school security. We also agree with legislative leaders that our state shouldn’t renege on its promises to reduce taxes on business and investment.

Taxing video sweepstakes may be a tough sell on Jones Street and in the governor’s mansion. It shouldn’t be. The industry already exists in a legal gray area. In the absence of state approval and regulation, it continues to grow. Folks who can’t see that are in denial.

North Carolina’s experiment in video sweepstakes prohibition has been a complete failure. Shut a gaming center down and it will reopen with new machines running new software that manages to skirt the latest iteration of the anti-gambling law on the books. It’s a game of Whack-a-Mole, and the taxpayers are losing.

If supporting public education was a sufficient reason to start a state lottery, isn’t it a good enough reason to legitimize a multimillion-dollar gaming industry that’s already here?