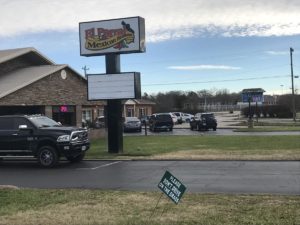 Lucky Day sweepstakes parlor is located beside El Parral, in its 20th year of operation at 734 S. Van Buren Road in Eden. Customers and police believe a signal radiating from the operation was interfering with their vehicles’ electronics systems..

EDEN — Police say they have recovered several electronic “anti-cheating devices” from a local sweepstakes operation and thereby remedied static that has for months disabled key fobs, locks and ignitions of cars parked nearby.

For now, investigators are referring to the gadgets they disconnected from the video game parlor’s popular fish game tables as “anti-cheating devices” until they are able to confirm the implements are indeed “jammers” commonly used for the purpose.

Lucky Day “is cooperating with us. They did not give us any problems,” Lamberth said of the removal effort.

Prior to the removal, police and owners of El Parral Mexican Restaurant next door at 734 S. Van Buren Road had received scores of complaints from the public.

Restaurant customers, including police officers, said they were consistently unable to use their remote key fobs, lock and ignition systems when parked close to Lucky Day.

Jammers are widely discussed on the internet by players and game system owners as an efficient way to block would-be bilkers from hijacking such fish games — made to look like glowing aquariums full of fish to zap for quick cash payouts.

While jammer use is considered by cyber experts to be a violation of federal law, Eden Police “are working with the Federal Communications Commission— to determine if devices we recovered meet the criteria to be considered a jamming device,” Lamberth said.

After the FCC investigation, Eden Police will know if they should charge Lucky Day with a crime.

The operation of fish table games is legal in North Carolina because it is considered different from gambling, based on simple luck, and deemed instead a game of skill and dexterity.

Customers who wish to park at the Mexican restaurant can now rest assured the electronic interference has stopped, according to Lamberth, who explained police tested their own vehicles’ remote key fobs and lock systems after removing the signal blockades and pronounced the problem solved.

“Once those devices were removed, we’ve not had any more reports of (key) remotes not working,” Lamberth said.

Officers further confirmed that even before removal of anti-cheating hardware, cell phones functioned normally inside and around Lucky Day and El Parral and that there was never interruption of patrons’ ability to make regular or 911 calls from either establishment.

There are no plans to check game tables at other Eden sweepstakes parlors, Lamberth said, noting police had yet to receive complaints of similar interference associated with other sweepstakes businesses.

Staff from Lucky Day could not be reached for comment, and a phone number listed for the establishment was out of order.

El Parral manager Art Ayala was relieved to hear the news that his patrons will no longer have the hassle of the mysterious car problems. And he wants diners to use the established restaurant’s parking area nearest Lucky Day without hesitation.

“I’m happy for the customers,” Ayala said. “They don’t make any complaint.

Calls made to the FCC were not returned due to the temporary partial federal government shutdown.