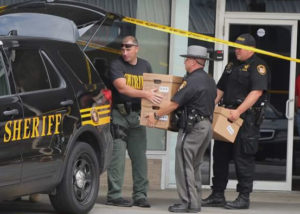 Players Choice in the Sheffield Center Plaza was one of the businesses raided by law enforcement agencies from around the county and the Ohio Casino Commission.

Local internet cafes were raided throughout Lorain County Wednesday as part of a coordinated investigation by a host of state and local agencies.

Ohio Casino Control Commission spokeswoman Jessica Franks said the commission was assisting in the raid in an illegal gambling investigation and directed further inquiries to the prosecutor’s office.

According to a statement from the prosecutor’s office, search and seizure warrants were served in multiple counties — Summit, Cuyahoga, Erie, Stark and Ottawa in addition to Lorain — for a multi-agency investigation into illegal gambling.

The release said the prosecutor’s office was working with law enforcement “to determine the nature and extent of criminal activity,” and that no further information would be readily available.

County Prosecutor Dennis Will said a list of all the establishments affected in Lorain County was not available Wednesday.

In a statement, Ohio Casino Control Commission Executive Director Matthew Schuler said while “significant” progress has been made in recent years to combat illegal gambling, its lucrative nature makes it difficult to fight.

“Illegal casinos prey on vulnerable Ohioans, operate without proper oversight and offer no recourse for consumers,” he said. “The commission will continue to use all of the tools at our disposal to shut down those establishments that disregard Ohio law.”

While the raid was ongoing at the Treasure Island Internet Café on state Route 82 in Eaton Township, a man who declined to be named stopped by to play some of the games, which involved loading money onto a prepaid card and swiping it to use the machines.

He said he had never seen anything he thought to be illegal inside the establishment.

“When I go in everyone is just really friendly and it’s a great opportunity to relax and have fun,” he said. “Everyone has always been so polite, including the people who work there. You just go up and put money on the card and that’s it. All of it seemed very legal.”

Olmsted Township resident Josie Gaughan said if something illegal was going on, then the law enforcement officials had every right to step in but she feels as though it’s “the government having a field day.”

“This is a past time for some people and it beats sitting at home in front of the TV,” she said. “A lot of older people come here as a way to pass the time. I enjoy playing here and I think they’re just sticking their nose in where it doesn’t necessarily belong.”

Gaughan said the Treasure Island Internet Café was the second one she had tried to go to Wednesday afternoon but the first one was closed as well.

“It’s just a shame,” she said, before driving away.

At the three internet cafes located in the same plaza as Marc’s near the intersection of North Ridge Road and Lake Avenue in Sheffield Township, Elyria resident Vicky Smith said she had never seen anything illegal at the establishments.

“We really come out of boredom, mostly,” she said, referring to her friend who did not want to be named. “It’s inside and air-conditioned and it’s something to do.”

Smith’s friend said it was a shame one of the Sheffield Township internet cafes was being closed because it had just been remodeled and often served food to customers from various local places around town depending on the night.

“It just always seemed really nice,” she said. “We come here often enough – just with like $20 and once it’s gone, it’s gone and we’re done – that I’ve not ever seen anything illegal.”