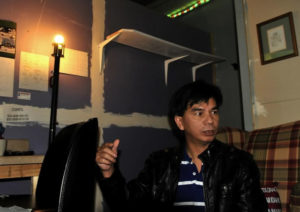 The alleged mastermind of an illegal gambling enterprise denies any involvement even as he prepares to begin serving an 18-month sentence in federal prison.

In an interview earlier this week, Kiet Vo, 50, of Fayetteville, denied involvement in the four large-scale underground video-gambling establishments that were shut down in 2015 after a 16-month investigation by the Cumberland County Sheriff’s Office.

Vo denies any involvement in owning or operating The Bubble Tea Room on Yadkin Road, the Bi-Da-Pool on Bragg Boulevard, Blazing 7′s on Hope Mills Road and the KV Internet Cafe on South Reilly Road. A fifth location operated briefly on Bonanza Drive.

Vo maintains he only repaired the video-game machines for those who ran the businesses.

“I was just the handyman,” Vo said.

His fee was 25 percent of the week’s profits from the machines. Sometimes, Vo said, he made money or he might only collect $1,000.

Most of the time, Vo picked up his payment, he said, but on occasions those operating the video-gambling outlets would deliver them or he would have his wife, Phong Truong, pick them up.

In 2015, a friend left a party at Vo’s home on Dodge Drive and was stopped by an “undercover officer” and asked about illegal gambling, Vo said. The friend called Vo after returning home and told him about the incident. Vo said he then warned to business owners to shut the businesses down.

“They told me if the law was coming, they will run from the law,” Vo said, referring to co-defendants. “I’m not the person breaking the law or that kind of person.”

In February, after Truong pleaded guilty, Vo asked to be allowed to live with his family, court documents show, and his request was granted. Truong is awaiting sentencing.

His wife and two children live in Myrtle Beach, South Carolina. In February, Vo sought to have travel restrictions requiring him to remain in North Carolina modified to allow him to live with his family. U.S. District Court Judge Louise W. Flanagan approved the request in February.

Vo sought permission in February to move back to Fayetteville and to live with a third-party custodian and his request was approved. He said his jail sentence begins June 28.