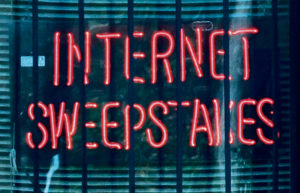 The Warrenton Town Board will hold a public hearing to receive citizen comments on a special use permit application for a gaming establishment prior to its February board meeting. The hearing will begin at 6:45 p.m. on Monday, Feb. 11, at the Warrenton Rural fire station, 236 S. Main St., Warrenton.

The town’s planning board met on Jan. 11 to consider the application for special use permit; however, the town failed to meet legal requirements regarding meeting notification to members of its Sunshine List and the media. The Sunshine List is a list of citizens who have requested to receive notification of meetings.

State law requires public bodies to give notice of meetings, except for emergency meetings, at least 48 hours in advance.

The special use permit application considered at the Jan. 11 meeting was presented by Claude O’Hagan, who wants to open an internet café in the old ABC Store location in the shopping center that formerly housed Just Save grocery store. O’Hagan owns Fire House Biscuits and Burgers on Warrenton’s Ridgeway Street and an internet café on U.S. Highway 1 in the Manson community.

According to minutes from the meeting, O’Hagan said he planned to conduct background checks and drug testing for all employees, and that patrons would probably be middle-aged people.

Planning board member Travis Packer questioned what impact there might be on a potential grocery store tenant. O’Hagan said his opinion was that having stores occupied was preferable to empty sites.

Town Administrator Robert Davie said in the meeting that when Just Save’s parent company was present, it did not allow sweepstakes tenants.

O’Hagan said that his internet café would have no music, flashing lights or loitering, as he “would not tolerate that type of behavior” and that he planned to hire a police officer on Friday and Saturday nights as a security guard.

A motion to allow an internet café/gaming business failed to pass, and the planning board voted 4-1 to deny the application.

Also in reference to O’Hagan’s application, the board considered language in the town’s zoning ordinance regarding distance from residential areas, and determined that any amendment to the ordinance would need to be made by the town board.

Following a brief discussion of the special use permit application at the town board’s Jan. 14 meeting, it was initially decided to send the issue to the planning and zoning committee to consider ordinance revisions to clear up any vague language.

However, after consultation with the town attorney, Davie told the newspaper that it was later determined that the issue about distance from residential areas had been misinterpreted, and the public hearing was scheduled instead.