Lawmakers look to crack down on sweepstakes machines 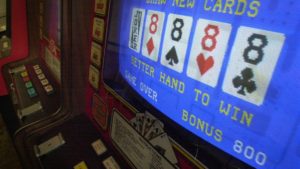 The state House is trying to beef up penalties for illegal sweepstakes operations, but it’s unclear if the Senate will consider the bill just days before the scheduled end of lawmakers’ session.

The House Finance Committee on Tuesday morning introduced a rewritten version of House Bill 471 that would make it a Class G felony to possess or operate two or more electronic gaming machines. Possession of the machine is already illegal — the result of a lengthy effort by the legislature to ban internet sweepstakes parlors — but the initial charge is a misdemeanor.

Rep. Destin Hall, a Caldwell County Republican and sponsor of the bill, says the measure “seeks to put some teeth to the law” and would also allow law enforcement officers to seize the machines while felony charges are pending. Under the current law, Hall said, sweepstakes operators aren’t deterred by the misdemeanor charges because “they’re making tremendous amounts of cash money.”

Hall’s proposal is stronger than a similar measure in House Bill 577 that would apply the Class G felony to operators with more than four electronic machines. HB 577 has been stuck in a conference committee for weeks, and Hall said that “things have somewhat broken down there,” so “I’m trying to forge my own path.”

He argues that the provision in HB 577 wouldn’t “solve the problem” because sweepstakes operators “can do the same thing with four machines — if you’ve got the right technology — as you can with 25.”

But Sen. Andy Wells, a Catawba County Republican and sponsor of the Senate’s version of HB 577, said any bill needs to include a distance requirement which would take into account that many of the machines can handle multiple players at once.

Wells said that while senators on the HB 577 conference committee signed off on the bill, several House members did not — preventing the bill from moving forward before the legislature’s self-imposed deadline to get bills to the governor.

So Hall’s bill might not get a hearing in the Senate if it passes the House. Senate Rules Chairman Bill Rabon, a Brunswick County Republican, said last week that the Senate currently is only considering constitutional amendments and local bills — which aren’t subject to the governor’s veto — in an effort to end the legislative session by the end of the week.

Asked about that likely roadblock, Hall said “I don’t know why the Senate would not hear it as this point,” adding that “I don’t foresee this extending session” if it goes to Gov. Roy Cooper. A spokeswoman for Senate leadership said she was not aware of any changes to the plan outlined by Rabon last week.