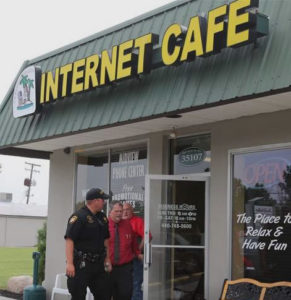 OCALA – A Gainesville man who admitted to breaking into an internet café to get cash, was arrested Wednesday by a sheriff’s detective.

Najuan Shaquile Burse-Williams told Detective Pam Thomas he fired shots at the front door, which broke the glass. He said he entered the building looking for money and got some from the cash register.

After the interview, he was charged with armed burglary of a structure, possession of burglary tools, possession of a firearm by a convicted felon and grand theft, according to the Marion County Sheriff’s Office.

Shortly after 4 a.m. Wednesday, deputies were called to the Lucky Duck Internet Café at 18651 N. U.S. 301 about a robbery. When deputies arrived, they noticed the front glass door was broken and the business was closed.

Searching the area, deputies saw a vehicle speeding westbound on County Road 318. The vehicle ran a stop sign at the intersection of U.S. 441 and CR 318. Deputies stopped the vehicle in the 18600 block of N. U.S. 441.

At the internet café, other deputies reviewed the store’s surveillance video and a still picture of the suspect was sent to Thomas, who by then was at the traffic stop. Thomas interviewed Burse-Williams about the incident and he denied committing the burglary. He said he was at the café.

Cash was found in Burse-Williams pocket and he said it came from his home. He said he’s not allowed to have a gun due to him being a convicted felon.

When Burse-Williams was interviewed a second time by Thomas, he was told about the video showing his vehicle. It was at that point, according to MCSO, that he confessed to being the burglar.

State records show he spent time in prison for grand theft and has been released since July 2017.

Burse-Williams, who celebrated his 28th birthday on Jan. 29, was at the Marion County Jail on Thursday on $70,000 bond. His next court appearance is March 5 at 9 a.m.